Computer programming has become one of the most profitable fields in the Nation. As such, our society is becoming increasingly tech-dependent. More and more programmers and developers are needed to code with some of the most complex programming languages. However, in the cumulative 2016 computer programming market there are some languages and skill sets that are more in demand than others.

According to information we’ve compiled from indeed.com and codingdojo.com, the top 5 most lucrative programming languages to know in this industry are shown in this handy chart we’ve created. Take a look: 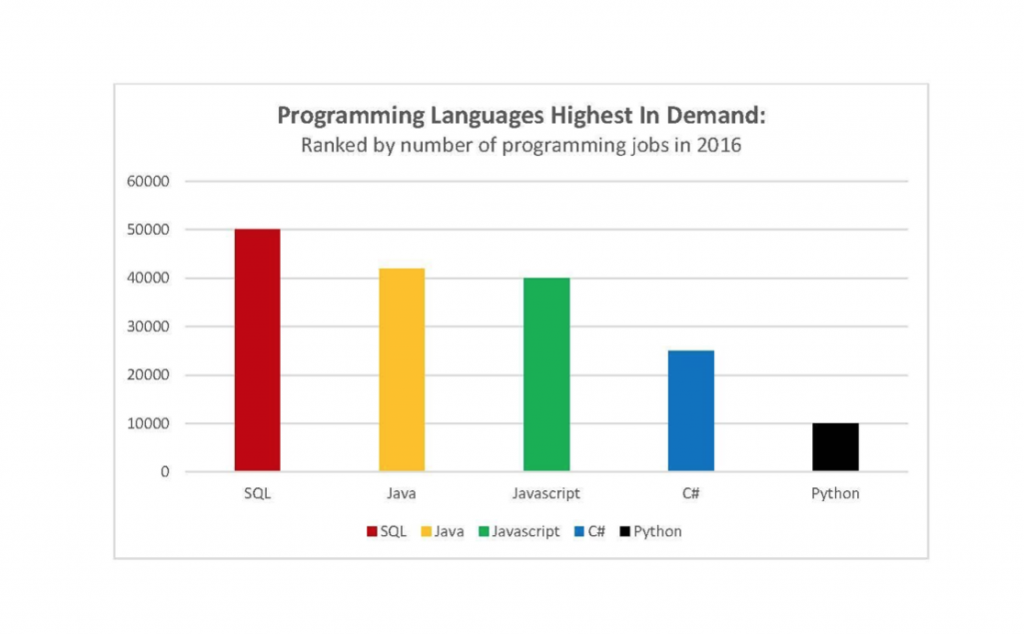 What is the reason behind this preference in demand for 2016? Let us explain:

SQL
Surprised to see Structured Query Language (SQL) in the #1 spot for most in demand programming language? We think most would agree that it deserves its grand first place award! SQL can be found everywhere. Database technologies such as MySQL and Microsoft SQL Server power businesses, hospital, banks, and universities. Within the massive amounts of data gathered every day today’s societies, SQL is an imperative and ‘hot’ programming language to know. If you haven’t already, it might be a good idea to learn this language until you know it inside and out. If you want to be super dynamic it would be good to learn SQL in addition to one or more of the below.

JAVA
Java, coming in second place, is also one of the most used and in-demand programming languages. Many applications and websites will actually not work unless Java is installed, and many more with that requirement are being created each and every day. Java is secure and reliable – that is why it is in such high demand. It’s’ luring readability and simplicity is why it is so appealing. Java is used to power some of the most popular company websites such as LinkedIn.com and Netflix.com. Moral of the story?-It’s everywhere and it powers almost everything in cyberspace. So, code away!

JAVASCRIPT
Although not as prominent in ranking as Java, Javascript is still up in the #3 most in-demand spot. Yes- Java and Javascript are not the same! Javascript is used to add interactivity to web pages and to create web apps. It is even used to create polls and quizzes! Javascript is easy to learn and is also a powerful scripting language, and because it runs on the client side of the web, simple features are key to satisfying the public by providing easy instructions. Since it’s visual, it’s a little easier to learn because you get to see immediately if things worked or not.

C#
This programming language is fairly new as most would agree. It didn’t appear in the computer programming world until the year 2000 (compared to SQL which first appeared in 1974 – wow!) However it contains some of java’s similar features proving it’s relevancy behind it’s high demand in 2016. C# is designed to work with Microsoft’s .net platform. It simplifies programming by not requiring the programmer to write additional code for each step. How helpful!

PYTHON
Python, coming in 5th place, is incredibly easy to work with since it closely resembles the English language. It’s use is huge within the educational realm because of it’s exquisite simplicity. People anywhere from beginners to professionals use python, proving that it is a widely used language! PBS and NASA use python for their websites, for example. It’s general purpose programming advantages are what draws people to this language.

Each programming language has it’s perks, what matters is to know what they are. Given this information, programmers and developers should have a better idea of what’s in high demand for 2016. Get geared up for the rigorous computer programming field and prepare yourself with the right programming and coding skill sets needed to succeed in this industry. In other words- start coding!

We’re here to inform you.